Home » TYPES » Bulbs » Amaryllis belladonna flowers
Back to Category Overview
Total images in all categories: 9,385
Total number of hits on all images: 4,215,833 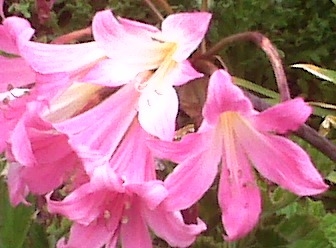 Amaryllis belladonna or belladonna lilies grow in the Western Cape from large, nearly spherical bulbs. Groups of these lilies are found on open grassy slopes among rocks, sometimes close to the sea. A sighting in the natural habitat is truly memorable.

The pink and white flowers occur at the end of summer or in autumn before the leaves have appeared. This leaflessness of the flowering plant has led to the common name of naked lady. The phenomenon is common among some bulbous species, botanically known as hysteranthy (www.plantzafrica.com).