Home » TYPES » Climbers » Thunbergia alata
Back to Category Overview
Total images in all categories: 8,892
Total number of hits on all images: 3,866,712 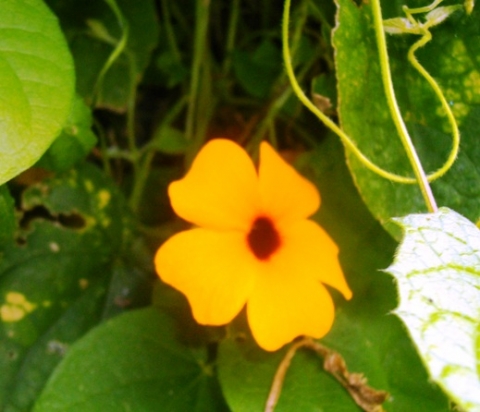 Thunbergia alata or black-eyed susan is a sought after garden creeper, a herbaceous perennial that grows fast and flowers much over a long summer season. Flowers have orange, yellow, white or nearly red corollas. Each of the five petals is bi-lobed. The corolla tube is purplish black or dark maroon. Leaves are ovate, arrow-tipped and sometimes serrated. The many branched stems will twine and climb like a vine over whatever is available and suitable.

T. alata grows in nature in the Eastern Cape and KwaZulu-Natal coastal areas and inland in Mpumalanga and Limpopo. It is common in several neighbouring countries and in tropical Africa. Although the plant is not invasive it has been naturalised on at least three continents apart from its African home base, viz. in north and south America and Australia.

The habitat is forest margins and open bush, also in full sun. It grows in a wide range of soil types, does not need much watering, but may have to be cut back or even planted annually after winter frost. The species is not considered to be threatened in its habitat early in the twenty first century (www.plantzafrica.com; Wikipedia; http://redlist.sanbi.org).