Home » TYPES » Ferns » Cheilanthes hirta
Back to Category Overview
Total images in all categories: 11,413
Total number of hits on all images: 6,186,665 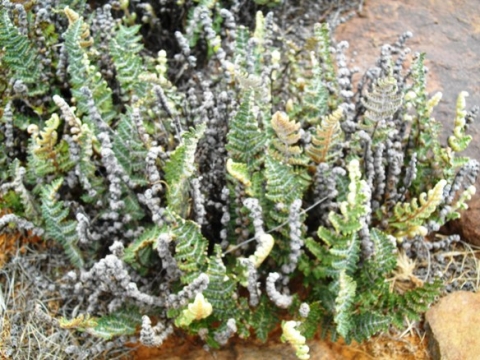 Cheilanthes hirta belongs to the Adiantaceae family. From the continually accumulating botanical literature this species appears to have travelled widely within the classification system. It used to be at home in the families of Pteridaceae and Sinopteridaceae and maybe elsewhere. Whether these travels are over, remains to be seen!

Geographically the plant is also world wise, living in all nine South African provinces, as well as to the north in African countries including Angola and Kenya. This specimen is growing happily in the Karoo near Beaufort West.

The species habitat is diverse, often moist, montane mist belts and among rocks. The species comprising five varieties in South Africa alone, is not considered to be threatened in its habitat early in the twenty first century.

Lack of available information often leads to plant identity loss (only among people of course). Fanciful nom de plumes, “undercover” labels, disputes and half-truths abound. Plants travelling incognito by name, genus or family at nurseries, botanical gardens, where workers forget or children play with labels, cause havoc. There are just too many to master.

Open access to literature, the formal nomenclature, well run botanical gardens where naughty kids don't swap the labels, professionalism in the horticulture and nursery business, education and avid interest are the best resources to deal with the problem (Shearing and Van Heerden, 2008; JSTOR; www.zimbabweflora.co.za; http://redlist.sanbi.org).