Home » TYPES » Ferns » Alsophila dregei
Back to Category Overview
Total images in all categories: 11,506
Total number of hits on all images: 6,513,543 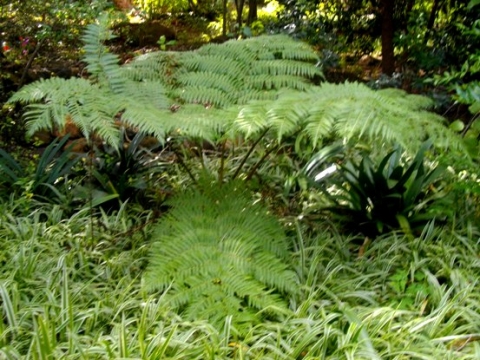 Previous
Image 3 of 40
Next

The grassland tree fern, common name of Alsophila dregei, previously Cyathea dregei, is found in reasonably moist conditions in many countries of southern Africa. It grows along rivers, in grassland and in rain forest areas. The local part of the natural distribution of this plant lies in the eastern and northern parts of South Africa.

This is a protected plant and must not be removed from the riverine kloofs where some good specimens still grace the land. In Australia the local tree fern common there, A. australis, seems robust in more arid conditions, growing in great numbers in Eucalyptus dominated forests.

There are more than 500 species of tree ferns worldwide, most of which occur in South America. Other species adorn Australian landscapes and some of the Pacific Ocean islands (Joffe, 2001; www.farngarten.de).