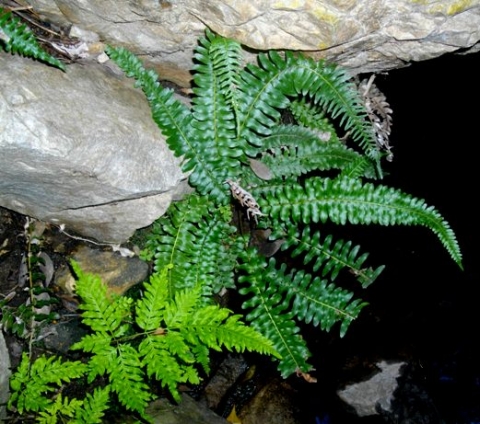 Ferns are often associated with shady, damp spots. Where rocky recesses offer these features, fern plants may abound, firmly anchored by their roots lodged in the crevices that also yield some nutrients. Ferns grow in varied conditions, including wetlands like swamps or bogs and in forests, even up in trees as epiphytes.

These dissimilar fronds seen in the southern Cape belong to members of the Rumohra and Blechnum genera respectively. The earliest ferns appeared on earth already in the carboniferous era, about 360 million years ago. Since those days these seedless vascular plants have differentiated into many species, genera and families, covering land all over the earth (Wikipedia).