Home » TYPES » Ferns » Gleichenia polypodioides
Back to Category Overview
Total images in all categories: 11,019
Total number of hits on all images: 5,657,571 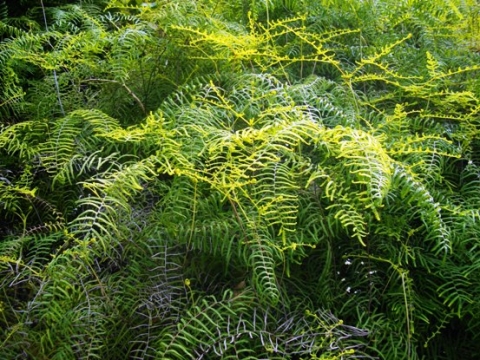 Gleichenia polypodioides, the coral fern or in Afrikaans kystervaring (coastal fern), is a much branched creeping fern, a rhizomatous perennial.

The plant may cover patches of land in impenetrable thicket, smothering some competitive vegetation. It is a pioneer plant of disturbed terrain such as plantation land after harvesting.

Commonly associated with coastal land, it does occur along the south and east coasts of South Africa from the Western Cape and Eastern Cape to KwaZulu-Natal. It also occurs inland, however, in Mpumalanga and Limpopo, as well as in East Africa and Madagascar.

The habitat of the coral fern is rocky land with high rainfall at low altitude, prone to fog. The species is not considered to be threatened in its habitat early in the twenty first century.

This indigenous fern is less known in South Africa than it deserves, sometimes thought to be an exotic invader. There are ten species of Gleichenia, but this is the only member of the genus found in South Africa (Bean and Johns, 2005; Wikipedia; http://redlist.sanbi.org).