Home » TYPES » Ferns » Polystichum incongruum
Back to Category Overview
Total images in all categories: 11,506
Total number of hits on all images: 6,513,604 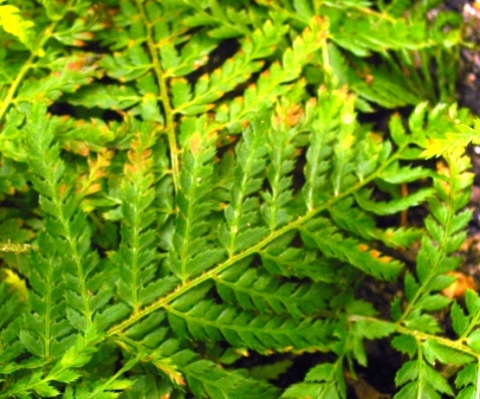 Polystichum incongruum is one of the shield ferns, a genus of maybe as many as 200 species. Only about 17 of them occur in South Africa, mainly in the eastern forested parts and among rocks in the Drakensberg. The genus is distributed widely on earth, excluding mainly the tropics and harsh deserts.  This species is endemic to the Eastern and Western Cape where it grows in forests and on open ground.

Polystichum incongruum has a shrub-like appearance and reaches 80 cm.  The leathery green fronds may become 2 m long, arching outward from the rhizomatous base. The plant is cultivated by dividing rhizomes and best grown in moist semi-shaded areas.

Polystichum comes from the Greek poly meaning many and stichos meaning order or rows. This may derive from the arrangement of the sori on the leaflets. Sori are the clusters of sporangia, the structures that produce and contain the fern’s spores (www.plantzafrica.com).