Home » TYPES » Ferns » Pteridium aquilinum
Back to Category Overview
Total images in all categories: 11,019
Total number of hits on all images: 5,657,600 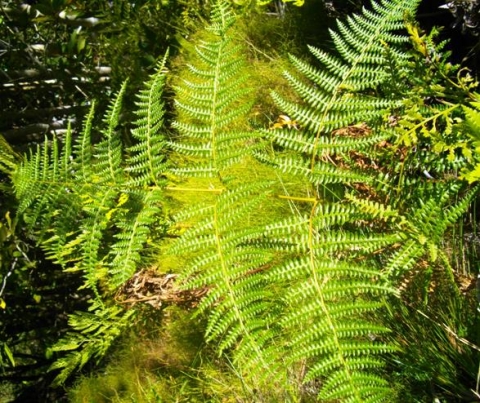 The common bracken or bracken fern as Pteridium aquilinum is commonly known, is the most abundant fern on earth in our time. The plant has a large number of common names in many languages as it grows in the neighbourhood of many communities in many countries. The resemblance of the frond to an eagle’s wing has been presented as one of the explanations for the choice of the specific name. The plant is a deciduous perennial fern belonging to the family Dennstaedtiaceae, adapted to temperate and subtropical conditions in many parts of the world.

The plant tends to spread over disturbed land. It is even considered invasive in countries where it is indigenous, such as England. The rhizomes survive fires, resprouting afterwards more vigorously than many competing species. In South Africa research has shown bracken fires to be hotter than adjacent grass fires, increasing mortality in plants such as Protea caffra that normally resprout after fires.

The plant contains carcinogens. In Japan where the young stems are eaten as a vegetable the high incidence of stomach cancer is believed to be related to this practice (Wikipedia; www.riel.cdu.edu.au).