Home » TYPES » Ferns » Schizaea pectinata or cockscomb fern
Back to Category Overview
Total images in all categories: 10,175
Total number of hits on all images: 4,839,057 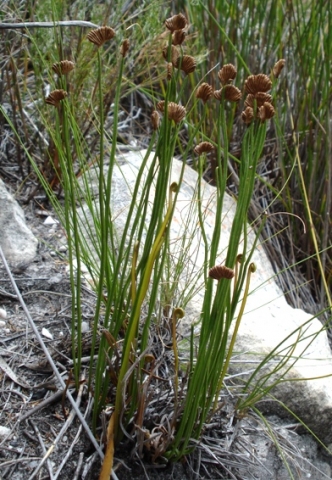 Schizaea pectinata, the toothbrush fern, cockscomb fern or curly grass fern, at first glance resembles the restios more than the ferns. Still, it is an attractive, low-growing grassy plant growing a tuft of erect, undivided fronds that reach about 30 cm in height.

The way in which the coiled, green fronds unfurl in spring to straighten from a seemingly wound up position, is a give-away clue of being a fern, not a restio.

S. pectinata is commonly seen during the first year after a fire. It typically grows on well-drained, sandy or quartzitic flats and slopes.

The distribution from around the Cederberg in the Western Cape along the coast to the Eastern Cape and KwaZulu-Natal reaches tropical Africa as far as Tanzania and the islands Madagascar and St. Helena.

This plant was photographed in Bainskloof during October (Manning and Goldblatt, 1996; Bean and Johns, 2005; Privett and Lutzeyer, 2010; iSpot).