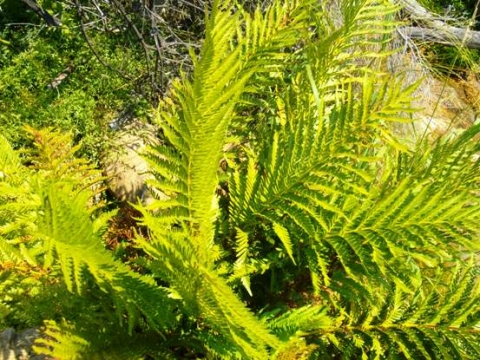 Todea barbara, the king fern, is an indigenous arborescent fern of South Africa, Australia and New Zealand. It was already growing at the time of the dinosaurs.

In those days the southern hemisphere had Gondwanaland as one land mass on which the ancestors of living species of today were spreading. The overlap in plant families between Australia, New Zealand, southern Africa and South America stems from this geographical entity that split up as the tectonic plates kept moving; as they still do!

The popularity of this plant among gardeners in Australia has brought the population under threat there. Too many illegal transplanters of long ago succumbed to the collecting urge, but often in vain. This plant does not transplant easily when it is large. Conservation lore is too often about remembered beauty that has already been lost. Fortunately the skill to grow ferns from spores is available to those with patience.

The biggest stems of T. barbara may be about 3 m tall and fronds may be up to 2,5 m in length. There may be two or more crowns on a mature plant. The spores grow large on the lower frond surfaces near the base. Frond texture becomes leathery with age.

The habitat of this fern is rainforest, open forest and rocky places in drier spots. The species is not considered to be threatened in its habitat early in the twenty first century (http://plantnet.rbgsyd.nsw.gov.au; Wikipedia; http://redlist.sanbi.org).