Home » GENERA E-F » Euryops » Euryops abrotanifolius
Back to Category Overview
Total images in all categories: 11,662
Total number of hits on all images: 6,776,001 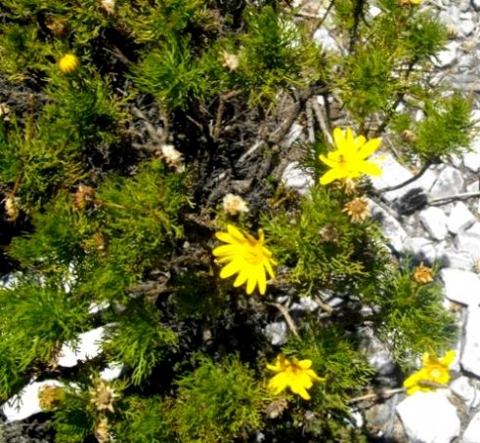 Previous
Image 1 of 72
Next

Euryops abrotanifolius, in Afrikaans known as geelmargriet (yellow marguerite) or bergharpuisbos (mountain resin bush), is a leafy shrub that grows from a single stem to 1 m, occasionally 2 m.

The dense, bluish green to fresh green leaves are from 6 cm to 9 cm long, divided into thread-like lobes, about 1,5 mm wide. The lobes are fleshy, shiny, mottled and longitudinally channelled, collectively presenting a feathery appearance.

The solitary yellow flowerheads on long stalks have hairy involucres comprising one row of pointed bracts that may be green or purple, lined longitudinally. The ray and disc florets are bright yellow, the rays sometimes reddish on the outside surfaces. The nearly oblong, narrowly elliptic rays with rounded tips, minutely notched, grow in a single row around the disc. The tiny disc florets are funnel-shaped, lobed.

The fruit, hairless and closely ribbed, has a fleshy appendage.

The distribution of this Western Cape endemic ranges from Clanwilliam to George; maybe marginally into the Northern Cape. The photo was taken on Table Mountain.

The habitat is rocky and sandy fynbos slopes, from sea-level to elevations around 1800 m. The species is sometimes prolific on recently burnt veld. The species is not considered to be threatened in its habitat early in the twenty first century (Manning, 2007; Clarke and Mackenzie, 2007; iSpot; Bean and Johns, 2005; http://redlist.sanbi.org).