Home » GENERA E-F » Euryops » Euryops evansii at the Sani Pass
Back to Category Overview
Total images in all categories: 11,756
Total number of hits on all images: 6,903,520

Euryops evansii at the Sani Pass 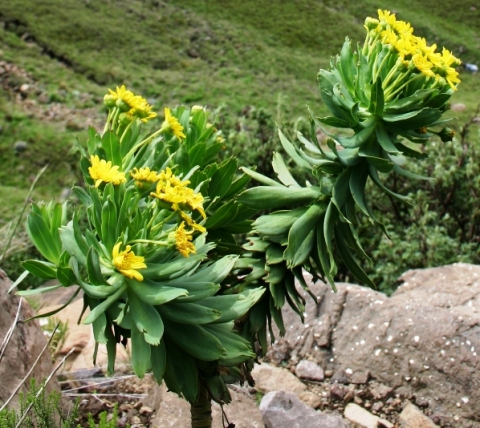 Previous
Image 3 of 76
Next

Euryops evansii is an erect evergreen shrub with large leaves and yellow daisy flowers. It occurs in Kwazulu-Natal in the Drakensberg area and also in Lesotho. The leaves are blue-green, oblong to lanceolate with three distinct teeth at their apices. The flowers grow in clusters at the branch tips with long petioles. The flowerhead has a cup-shaped base enclosed by a row of oval bracts.

There are 97 species of Euryops, all in Africa with only one species extending to Arabia and Socotra; most of them occur in South Africa. Eurys means large and ops means eye (both Greek), referring to the large flowers common in the genus. Euryops plants often contain resin, which used to be sought after in traditional medicine (Manning, 2009; www.plantzafrica.com).