Home » GENERA E-F » Euryops » Euryops othonnoides involucres
Back to Category Overview
Total images in all categories: 12,072
Total number of hits on all images: 7,366,257 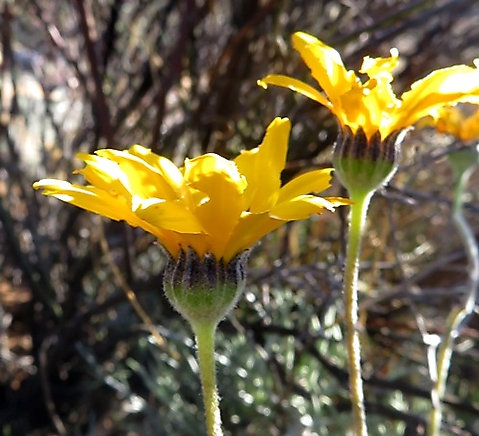 The rounded cup-shape of the Euryops othonnoides involucre ends in pointed, black-purple bracts curving out. The slightly unevenly sized bracts begin in green where they bulge and cohere below the point where tapering equals separation, near the tips.

Hairiness on the involucres in picture is less pronounced than on the peduncles.

Texture, shape and colouring of involucre and rays are alien to each other. The unlike floral organs are dissimilar in both appearance and function.

The more staid and firm appearance of the involucre relates to a task of keeping things together, orderly and safe. The floral brightness and looseness of the rays are more celebratory and inviting in a public relations sense (Vlok and Schutte-Vlok, 2010; iNaturalist).