Home » GENERA B » Bauhinia » Bauhinia bowkeri flowers
Back to Category Overview
Total images in all categories: 11,506
Total number of hits on all images: 6,513,634 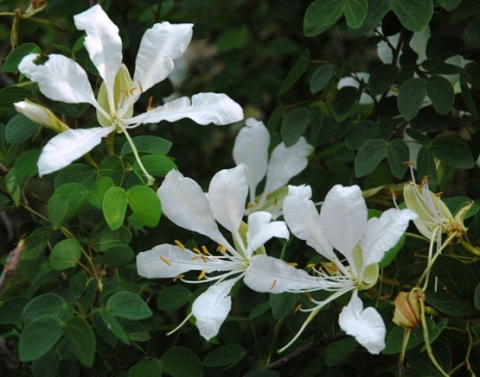 Previous
Image 1 of 12
Next

The five white Bauhinia bowkeri petals are stalked, clawed or spoon-shaped. They spread widely enough into a shallow bowl-shape to leave space among them. Their margins are more wavy than crinkly.

The calyx splits on one side only, releasing the corolla. Greenish cream on both surfaces, it turns brown later when it persists past flowering.

The ten stamens have long, white filaments and small, oblong, beige anthers. The curving white style is even longer, curving among them.