Home » GENERA B » Bauhinia » Bauhinia petersiana subsp. macrantha
Back to Category Overview
Total images in all categories: 11,506
Total number of hits on all images: 6,513,606 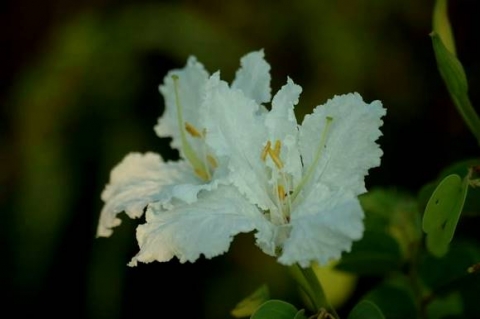 Previous
Image 9 of 12
Next

Bauhinia petersiana subsp. macrantha, commonly the Kalahari bauhinia or in Afrikaans the koffiebeesklou (coffee cattle claw), is a spreading, evergreen shrub that may scramble, sometimes reaching tree proportions to 7 m tall (SA Tree List No. 208.3). The bark is dark grey-brown, powdery and flaking on old trees.

The leaves have the rounded, two-lobed shape associated with Bauhinia, divided to about half the leaf’s length. The leaf veins are nearly straight across the blades, apart from the outside one that curves along the margin; the big ones prominent below. The leaf margins are entire, the petiole up to 2 cm long.

The fragrant flowers are white, somewhat similar to B. bowkeri, but far crinklier along the margins on this plant, as seen in the photo. The petals are about 8 cm long and 1 cm to 1,5 cm wide. Only three to six of the stamens are fertile, not growing very long in this plant. There is occasionally some faint pink on the filaments of the stamens. Flowering happens around midsummer.

The flat pod is smooth and brown, from 12 cm to 18 cm long and from 3 cm to 6 cm wide. It is dehiscent, splitting explosively, after which the two halves curl into spirals.

The subspecies is the only one occurring in South Africa. It grows in North West, Gauteng and Limpopo, as well as in Namibia, Botswana, Zimbabwe, Tanzania and as far as Zaire.

The habitat is woodland or bushveld, usually in Kalahari sand at medium and low altitudes. The subspecies is not considered to be threatened in its habitat early in the twenty first century.

The bark was used to make ropes. The seeds are roasted and used as a coffee substitute or made into a porridge. Young pods have been eaten as a spinach dish. Some traditional medicinal uses for the plant have been recorded in several African countries (Coates Palgrave, 2002; Van Wyk and Van Wyk, 1997; www.plantzafrica.com; http://redlist.sanbi.org).