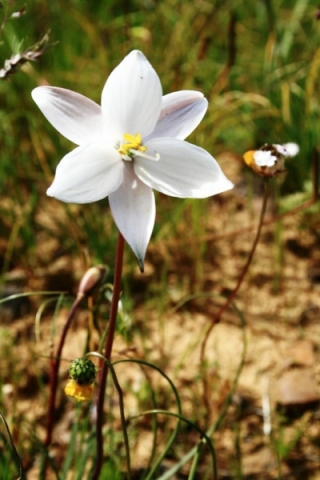 Previous
Image 1 of 34
Next

Cyanella alba is one of nine Cyanella species in South Africa, not counting subspecies. Most of them grow from turnip-like corms. Tufts of narrow or terete (thinly cylindrical) appear annually at ground level.

One stamen is curiously separate from the other five that cohere, earning the species the common name of lady's hand. The style is long, white and also angled to one side. The inner three petals are often a little different to the outer ones in colour and shape.

Various indigenous and early settler populations used to eat the roasted corms of several Cyanella species, calling them raaptolle. A raap is Afrikaans for turnip, a tol is a (spinning) top, also Afrikaans. Raaptol refers to the shape of the corm.

When balanced meals were not available from supermarkets, the land served the purpose, famine not far in nature's seasons of rest or hardship. People lived closer to the land then, more aware of its wellbeing from going hungry when the land suffered. The risk is still the same, the reminders just harder to see by people enjoying continuous supplies via urbanised commercialism.

C. alba grows in the western inland winter rainfall region in the Cederberg and around towns like Nieuwoudtville, Clanwilliam and Ceres. All three its subspecies are rare or vulnerable in their habitat early in the twenty first century, subsp. alba vulnerable due to the expansion of agricultural activities in its terrain.

C. lutea with yellow or pink flowers is more widespread, C. orchidiformis has mauve or white flowers, occurring near Clanwilliam and C. hyacinthoides has white, mauve or pink flowers, grows from the Cape Peninsula to Namaqualand (Bond and Goldblatt, 1984; Fox and Norwood Young, 1982; www.redlist.sanbi.org).