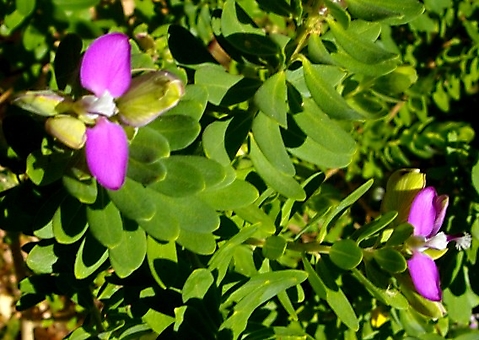 Polygala or milkwort is a genus of annual and perennial herbs, undershrubs, shrubs and sometimes trees in the Polygalaceae family. The generic name, Polygala, is derived from the Greek words polus meaning many and gala meaning milk, referring to the belief that feeding cows on certain Polygala species increased their milk yield. This also explains the milkwort common name.

The nitrogen-fixing roots are said to resemble wintergreen in smell and taste.

The leaves are mostly alternate or spirally arranged and simple, varying much in size and shape, the margins usually entire.

The often pink or purple, laterally symmetrical flowers are bisexual, resembling butterflies in shape. They grow in stem-tip or axillary racemes, in fewer species solitary. The outer three sepals are sepal-like, while the inner two are petal-like wings, growing separate or united.

There are three to five petals in a flower, the lower one forming a boat-shaped or hooded keel with a brush-like (or at least multilobed) crest near its tip. The lateral petals are small, sometimes two-lobed. A disc is sometimes present in the flower-base.

Four to nine stamens may be present, positioned in the fold of the keel, some of them may only be infertile staminodes. The ovary has two locules, the style bent or curved, the stigma skew.

The fruit is a membranous, compressed capsule that becomes dry as it ripens. The pair or often single seed that develops usually has a hairy covering and a white aril attachment. The mostly black seeds are often distributed by ants that eat the arils.

There are about 600 Polygala species found worldwide in temperate and warmer regions, the highest prevalence of species found in South America. Africa and Madagascar have 232 of them, 88 of which occur in southern Africa. Many species are popular garden plants and some are used in traditional medicine. Some species serve as food for butterfly larvae.