Home » GENERA P » Polygala » Polygala rhinostigma
Back to Category Overview
Total images in all categories: 11,638
Total number of hits on all images: 6,757,201 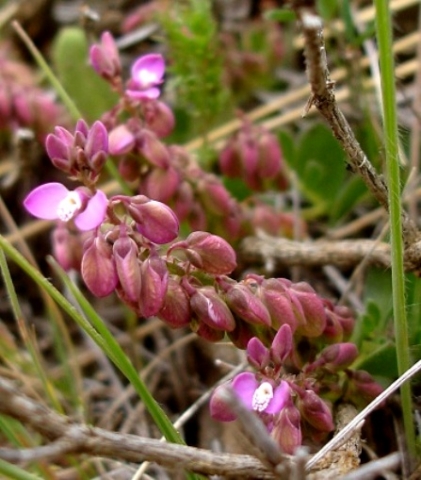 Polygala rhinostigma is a shrub bearing straight, dense racemes of pink flowers. The lax, erect branches are rough, woody and pale grey when they grow old, green when young.

The outside of the unopened flower buds have dark pink colouring, lined with beige-brown veins among tinges of green. Some of the sepals are small, elliptic and tapering to acute tips. Two enlarged sepals or bracts spread in open flowers as petal-like wings, revealing the keel where the stamens are concealed near the white corolla crest.

The species grows in KwaZulu-Natal, the Free State and the Eastern Cape, as well as in Lesotho. The habitat is montane grassland, often at higher elevations. This photo was taken in January in the Maluti Mountains of eastern Lesotho.

A tincture made of this plant used to be ingested by indigenous tribes as part of their spiritual rituals (iSpot; www.redlist.sanbi.org; www.thebotanicalsource.com).