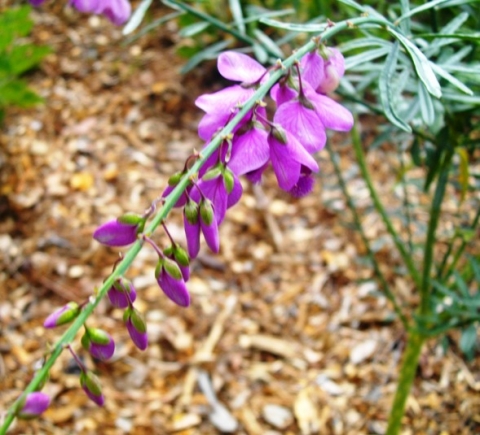 Polygala virgata, the bloukappie (blue bonnet) in Afrikaans, produces these attractive slender racemes of purple flowers in profusion during the last quarter of the year. The narrowly elliptical leaves are positioned alternately on the stems.

The plant grows in the wild mainly in the eastern half of South Africa, but also in the south-east of the Western Province. It occurs at forest edges and open bush. The distribution extends beyond South Africa into tropical Africa.

The plant is grazed by livestock and game. Pollination involves a multitude of insect species, particularly bees and bumblebees.

This particular form of the plant was photographed at Kirstenbosch in March. There are other variations mentioned in the literature beyond P. virgata var. virgata, particularly var. speciosa, var. genistoides and var. decora, the latter of which grows in Zimbabwe (Manning, 2009; www.plantzafrica.com; www.zimbabweflora.co.zw).