Home » TYPES » Herbs » Streptocarpus formosus flower
Back to Category Overview
Total images in all categories: 9,840
Total number of hits on all images: 4,461,257 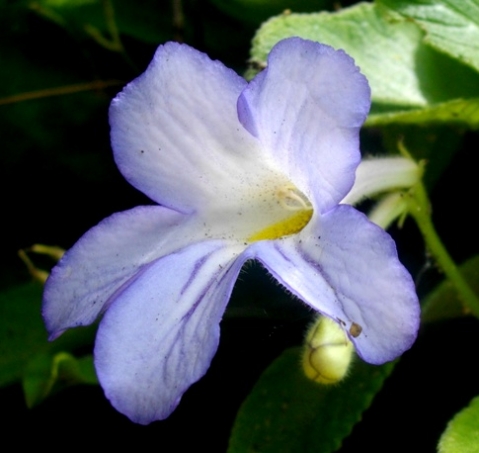 The flowers of Streptocarpus formosus live up to their specific name, formosus, meaning beautiful in Latin. The flowers grow solitary or in pairs on stalks that may exceed 10 cm in length. Several flower stalks may be present on a plant, succeeding each other as each leaf produces more, depending on what the plant's resources allow.

The corolla of the flower is two-lipped and five-lobed, the small green calyx having five narrowly pointed lobes as well. The corolla tube is narrowly funnel-shaped, white on its outside. The large, rounded corolla lobes have bluish mauve or faint blue to pale violet colouring that deepens towards their rounded margins.

A yellow blotch is visible inside the throat on the floor of the tube. There are also some tiny dark speckles scattered inside the corolla, more concentrated along the dark veins on the lower lobes.

In the photo the second flower of the pair still has its petal lobes folded in upon each other in the club-shaped bud. They are cream coloured and hairy with dark margins.

Flowering happens from late spring to early autumn. The photo was taken in mid-March.