Home » TYPES » Herbs » Trifolium burchellianum subsp. burchellianum
Back to Category Overview
Total images in all categories: 10,710
Total number of hits on all images: 5,375,996 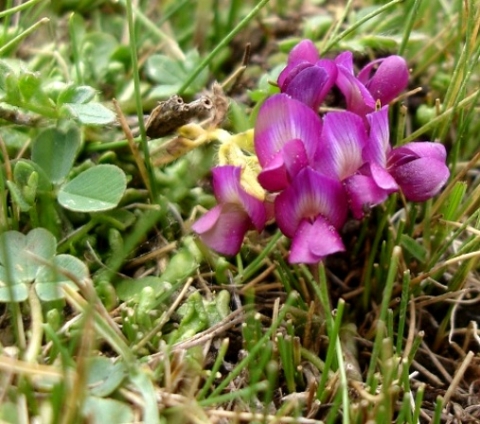 Trifolium burchellianum subsp. burchellianum or Burchell’s clover is a creeping, sometimes ascending perennial that may reach 60 cm in height. It has a strong taproot and roots at stem nodes that touch the ground. The trifoliolate leaves have rounded wedge-shaped leaflets. Leaflet margins are finely toothed.

The heads of purple flowers grow on long, erect peduncles above the foliage. Dark lines are found near the pale base of the corolla banner of the flowers in picture. Flowering lasts from spring to early autumn.

The distribution ranges from the Western Cape to Limpopo along the eastern parts of the country, both coastal and inland, most common in the Eastern Cape, the Free State and KwaZulu-Natal; also found in tropical Africa.

The habitat is grassland and forest margins. The subspecies is not considered to be threatened in its habitat early in the twenty first century. The plant forms part of some legume pasture mixes.