Home » TYPES » Herbs » Xerophyta retinervis white flowers
Back to Category Overview
Total images in all categories: 11,656
Total number of hits on all images: 6,771,007 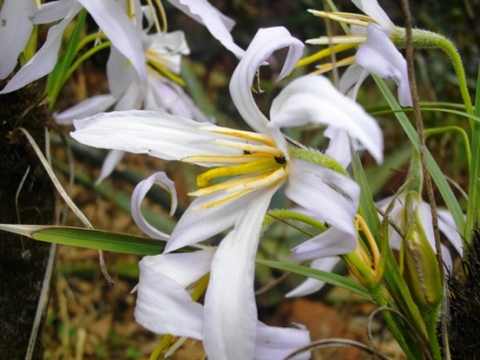 The name of Xerophyta retinervis reflects the drought tolerance of the plant. It is formed from the two Greek words xeros (dry) and phytos (plant). Retinervis (Latin) means network of veins. The previous name, Vellozia retinervis is still commonly found in the literature; the plants belong to the Velloziaceae family.

The flowers are pale to dark mauve, blue or occasionally white. They grow in groups on separate slender stalks from around the stem tip leaf tufts. The tepals recurve loosely. The white flower in picture is being visited by insects (Van Wyk, et al, 1997).

(See also the Plant Record under Herbs elsewhere on this Site.)