Home » TYPES » Herbs » Xerophyta retinervis
Back to Category Overview
Total images in all categories: 11,656
Total number of hits on all images: 6,771,147 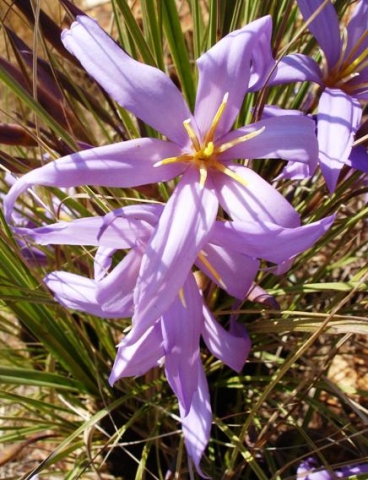 Xerophyta retinervis or the black-stick lily, monkey’s tail or in Afrikaans bobbejaanstert (baboon tail) grows erect, black stems that make the plant easy to identify. These branched stems retained from the leaf bases of previous seasons are unusual.

The land where these plants grow is prone to veld fires. The dry, fibrous leaf base parts on the stems become blackened by the fires while the plant survives, thanks to its fire resistent fibrous mat covering. The plant also survives cold, drought and the low nutrient soils typical of its habitat.

The species is found across the northeast of South Africa, in all the provinces north of the Vaal River, as well as in Swaziland.

The habitat is summer rainfall rocky hillsides. The plant is not threatened in its habitat early in the twenty first century, but stressed from frequent harvesting for medicinal and cultural practices of indigenous populations (Manning, 2009; www.plantzafrica.com; http://redlist.sanbi.org).