Home » TYPES » Mesembs » Galenia africana var. africana
Back to Category Overview
Total images in all categories: 9,765
Total number of hits on all images: 4,386,643 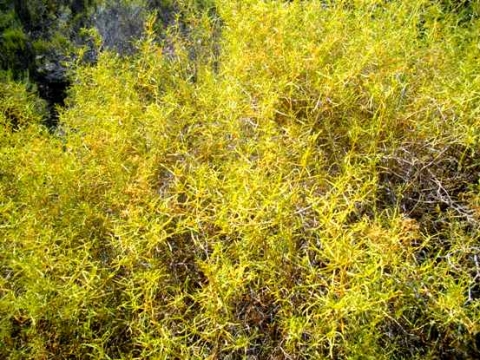 Galenia africana var. africana is an erect, somewhat spreading, much-branched shrub that grows to 1 m in height. The 27 Galenia species of southern to tropical Africa are unusual looking members of the Aizoaceae family that is notable for holding many surprising shapes. Galenia flowers produce single ovules in each chamber similar to Tetragonia plants, also mesembs. The latter genus has much larger seeds characterised by often conspicuous wings on their capsules.

The distribution of G. africana var. africana in nature is large, ranging from Namaqualand, throughout the Karoo and Little Karoo to the Eastern Cape. The habitat is diverse and the plant often found on disturbed land. Its presence in large numbers is an indicator of overgrazing or poorly managed veld. The species is thought to be on the increase in representation and spread.

The common name of kraalbos (pen or corral bush) comes from the profusion of these pioneer plants on land previously denuded by the hooves of livestock gathered for the night. It is often also seen on the verges of roads in degraded areas.

The plant is toxic to sheep and some other livestock, causing liver damage. Horses, donkeys and maybe zebras browse it, however, without ill effects. This brought about another common name of perdebos (horse bush) for this much seen plant (Riley, 1963; Vlok and Schutte-Vlok, 2010).