Home » TYPES » Orchids » Calanthe sylvatica
Back to Category Overview
Total images in all categories: 11,903
Total number of hits on all images: 7,148,472 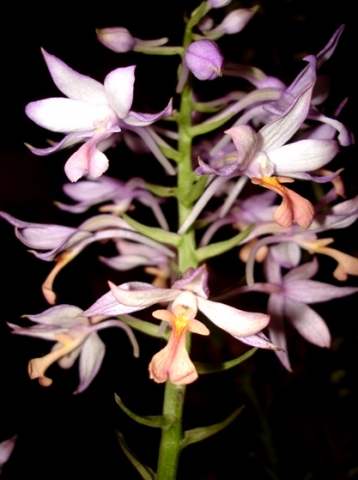 Calanthe sylvatica is a terrestrial orchid reaching heights around 75 cm. This genus is represented by only this one species in South Africa, about 120 of them occurring in tropical Asia, Japan and Australia. The generic name, Calanthe, was formed from the Greek words kalos meaning beautiful and anthos meaning flower.

The tufted leaves of this plant are lance-shaped to elliptic with stalks (or tapering into a stalk-like appearance at the base). Leaf surfaces are green and pleated. The leaves become about 60 cm long, 15 cm wide.

The distribution of C. sylvatica is coastal from the southern Cape to KwaZulu-Natal, inland in the Lowveld of Mpumalanga and Limpopo and widespread in tropical Africa, as far as Sierra Leone.

The habitat is forest floors in deep shade near streams. The specific name, sylvatica, from the Latin, is an adjective pertaining to forests. The plants occurs to medium altitudes. The species is not considered threatened in its habitat early in the twenty first century (Pooley, 1998; JSTOR; Wikipedia; www.redlist.sanbi.org).