Home » TYPES » Parasites » Harveya purpurea
Back to Category Overview
Total images in all categories: 8,892
Total number of hits on all images: 3,866,444 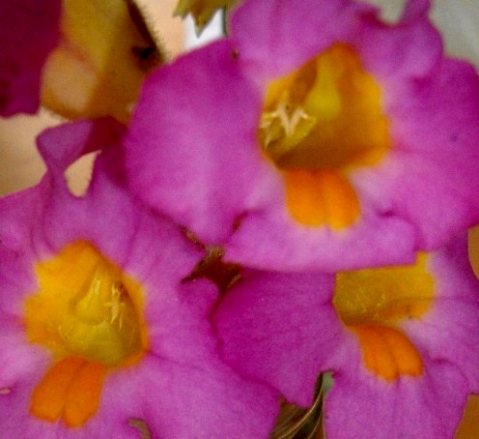 Harveya purpurea, in Afrikaans commonly known as the pers inkblom (purple ink flower), is an annual herb parasitic on the roots of shrubs and trees. It reaches about 15 cm in height. Small, yellowish, scale-like leaves are scattered along the stem.

The large, showy and fragrant flowers grow on short stalks in a short or lax raceme. The flower is broadly funnel-shape, the cup-shaped calyx deeply lobed and reaching half-way up the corolla.

The corolla is two-lipped, ending in five spreading lobes, round-tipped and wavy with toothed or ragged margins. The corolla diameter is about 4 cm; its tube is from 2,5 cm to 3,5 cm long, whitish and hairy on the outside. The flower colour is variable, including white, shades of pink and purple on the corolla lobes and yellow or greenish inside the tube. A rare yellow-flowering form is sometimes mentioned. A pair of orange-yellow blotches is visible at the base of the lower lobe in the photo. The flowers turn black when handled or dried. Flowering happens in spring and summer.

These flowers produce thousands of minuscule seeds that wash into the ground where their only growth chance upon germination is to attach to the roots of a living host.

The species is endemic to South Africa, found in the Western Cape and Eastern Cape as far east as Grahamstown. The habitat is fynbos on sandstone slopes and sandy flats. The species is not considered to be threatened in its habitat early in the twenty first century (Vlok and Schutte-Vlok, 2010; Manning, 2009; iNaturalist; Wikipedia; http://redlist.sanbi.org).