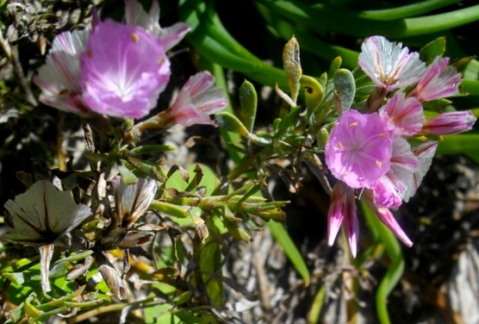 Previous
Image 5 of 14
Next

The flowers of Limonium capense, in Afrikaans the Saldanha strandroos (beach rose), have pink-purple petals upon opening. The petals bleach to white as they age, leaving only the lateral petal margins retaining some colour. The stamens can be seen spreading just above the corolla. The anthers are yellow. The calyx is funnel-shaped.

Humanity has become the single dominant species on earth, growing in numbers and impact at unprecedented rate. There is knowledge about expected tapering off of our population growth but the forecasts are not fact and the impact is already severe. Its levelling off globally still lies in the future, currently in speculation much more than action.

People invade the living space of about every other living species, seemingly without a thought or a care on our part. As we label species weeds and noxious, other species must regard us as hostile and dangerous as well, to the extent that they are capable of learning and drawing such conclusions.

We also learn continually. Among other things that we don't eat, drink or breathe without help from other species. We therefore have a survival dependency upon biological diversity, i.e. upon other species doing well from being effectively cared for.

This little plant is hardy and still standing, as Elton John might sing! There are concerned citizens who take care, once they become aware of cases of species endangerment.

Like Harold Porter National Botanical Garden staff who grow L. capense and many other indigenous plants for brightening the experience of visitors, as well as keeping rare ones alive and selling plants cheaply to gardeners for sharing the effort (Manning, 2007; www.ispot.org.za; www.redlist.sanbi.org).