Home » REGIONS » Limpopo Valley » Dicerocaryum senecioides flower
Back to Category Overview
Total images in all categories: 11,019
Total number of hits on all images: 5,657,601 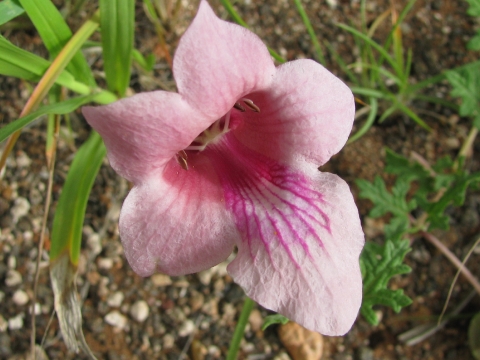 The flowers of Dicerocaryum senecioides grow solitary on long, erect pedicels from leaf axils. The somewhat oblique calyx has lance-shaped lobes, much shorter than the corolla.

The obliquely funnel-shaped corolla is two-lipped, laterally broadened and somewhat flattened at the top. The upper lip is two-lobed, the lobes erect or recurved, attenuating to pointed tips. The lower lip is three-lobed, the lobes with rounded tips and the central one largest, pointing down. The corolla colour is pale pink with parallel vein lines longitudinal down the central lobe through a white patch halfway to the tip.

One pair of oblong, brown anthers reach the mouth, the other pair on slightly shorter filaments. Flowering happens from late summer through autumn.

The brown, woody fruit has an oval disc-shape, the upper central part raised with two conspicuous thorns upon it. They are sharp, hard, erect and conical, the devil thorns of the plant's common name (Pooley, 1998; iNaturalist).