Home » REGIONS » Limpopo Valley » Eland in Limpopo Valley bushveld
Back to Category Overview
Total images in all categories: 11,019
Total number of hits on all images: 5,657,441 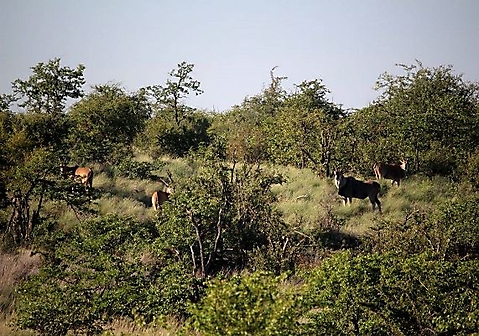 The eland, Taurotragus oryx, is the biggest antelope on earth, also the slowest. The male may weigh up to 1000 kg and stand 1,7 m tall at shoulder height. It lives from twelve to twenty years in the wild, a few years longer in captivity.

Both genders of these even-toed, bovine animals have spiral-ridged horns. Those of the male are shorter and thicker. Male horns serve in hierarchy related fights (adding to head-butting). Female ones protect their young.

The pale yellow-brown or tan eland coats may turn bluish grey with age. The dewlap below the throat that grows throughout the animal’s life may serve to regulate body temperature or as a tactile facility.

The eland lives in semi-desert scrub plains and montane areas of open woodland, tending more to browsing than grazing. They also use horns to knock leaves off trees for eating and dig up tubers and bulbs using their front hooves. Feeding happens mostly at dawn and dusk, the species crepuscular.

The animal is not dependent on water, favouring new shoots high in moisture in its selective browsing, but drinks when water is available. During drought animals like the eland will trek to water sources, also artificially provided ones, only to die there from hunger; part of the argument against boreholes for providing water for game in the veld.

Not fast like gazelles, they can jump impressively. Even old bulls clear 2 m fences, young ones 3 m. This presents crop farmers with problems where eland is near.

The eland is gregarious. Herds as big as 500 animals occur, while family herds consist of a bull and up to twelve adult cows. Bachelor herds are formed by young bulls until they reach sexual maturity at five years of age. Bull and cow hierarchies are separate, the bull dominant over cows.

Cows in heat are guarded by the dominant bull that reserves mating rights. Gestation of the single calf takes nine months. It is born in spring, weighing about 35 kg and can follow the mother by about four hours after birth. She hides her calf, visiting it twice daily for suckling over a period of about seven months. Many eland calves are caught by predators (Riëtte, 2016; Wikipedia).