Home » REGIONS » Limpopo Valley » Space to roam
Back to Category Overview
Total images in all categories: 11,019
Total number of hits on all images: 5,657,572 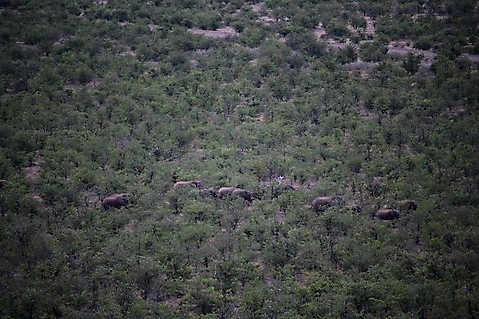 Land requirements on earth are very different per species. Humanity has reached some measure of control, dictating rules for allocations to all. From zero being the share allocation of unwanted vermin (a human definition of who or what is listed for extermination), to the maximal comfort zone reserved for only itself. Dogs and horses do fairly well on the scale, while mosquitoes do badly. Covid-19 not badly enough (yet).

So, some species deemed harmful or not useful are deliberately exterminated, others are “welcomed” as commercially important to people's wellbeing, or interesting within limits as curiosities for education or recreation. Calls for preserving biodiversity are heard from time to time, while laws for preserving biodiversity are applied from the human perspective, from time to time, within reason.

Human population growth has not yet levelled off globally, since its steep escalation from the First Industrial Revolution starting in the eighteenth  century. If people numbers stabilise by the minimising of poverty (rather than from cataclysm), per capita human land use requirements may still rise, leaving less to “the rest”, the underprivileged residuals of other species in the land of the living.

The tone and details of every comment about these matters both please and offend some people, no matter what is being said about it. The incidence of such talk is, however, continually on the rise in our time, for the outcomes and implications of linear progression of some current trends are dawning on more people continually.

It is safe to say that efforts to deal with nature conservation, albeit only for the benefit of people, will be piecemeal and meeting opposition from those with opposing vested interests, ideas and convictions. Even the wisest and most exemplary projects and programmes meet with opposition and will continue to do so. Doing nothing is but one of the many options pleasing or exasperating people today.

Africa is blessed with natural resources and exciting wildlife recognised worldwide. Colonialism has done much to spread knowledge about the continent and what can be expected from it, let alone its impact on the human condition on the continent. This knowledge and interest may have waned in some quarters since Uhuru, but grown in others for various reasons, including communication, travel, tourism that shrink the global village and the attempts at world government.

Africa's own management of its environment and natural resources is a mixed bag of successes and failures. It is fraught with many problems, such as increasing technology, complex economics and all kinds of political developments impacting in frenzied waves of change, often benefiting very few.

The squeeze on all the other living species on earth by humans and their escalating needs is continuing or increasing worldwide, also in Africa. Urbanisation will leave some rural land unoccupied, rarely unaffected.

Ancestors and dominant tribes and nations of the past can be cursed for their mistakes, all to no avail. A generation may pass the time, inert and inconsequential in passive observation of events good and bad, or it can plan, work and sacrifice for a better future. Many words, few viable plans and little consensus characterise the better future dialogue as trends continue to succeed each other in the dreams and talk of the people.

Every generation has a unique set of opportunities, the variables to influence before its time is up. The generation's report card is its legacy, the gift to its children. Every noun in this sentence represents a library of ideas.