Home » REGIONS » Limpopo Valley » Inspiration for the Voortrekker Monument?
Back to Category Overview
Total images in all categories: 11,019
Total number of hits on all images: 5,657,569

Inspiration for the Voortrekker Monument? 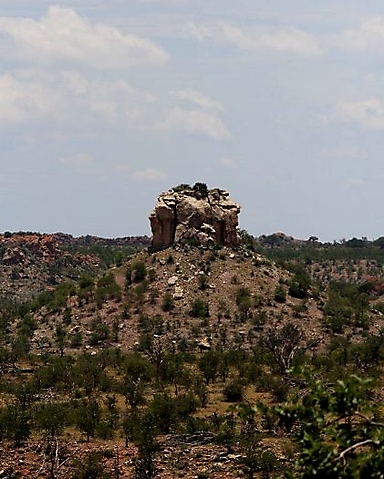 Gerard Moerdijk, the designer of the Voortrekker Monument near Pretoria and first South African to become an Associate of the Royal Institute of British Architects, is said to have received his inspiration for the Monument from this Limpopo Valley hill.

The region has many rocky hills and impressively shaped outcrops, this one particularly eye-catching. What sparks the impetus for a creative work remembered by millions?

The son of a Dutch immigrant teacher, Moerdijk was born on a Waterberg farm near Modimolle (previously Nylstroom). As a child he was interned with his mother and siblings in a British concentration camp at Standerton. Schooled in the Pretoria College, later Pretoria Boys High, he received an early prize after school for a school building design, commissioned by the Department of Public works where he also worked in his youth.

Architectural studies in London were followed by an illustrious professional career including the designing of many churches and other buildings, apart from the Monument.

Extensive overseas travels must have added much to his life experiences and professional ideas, but he may have seen this hill, being a son of the northern bushveld. The image may have stayed with him and inspired him, or the story linking hill and Monument may be a rural legend (Wikipedia).