Home » TYPES » Trees » Faurea macnaughtonii
Back to Category Overview
Total images in all categories: 11,239
Total number of hits on all images: 5,948,473 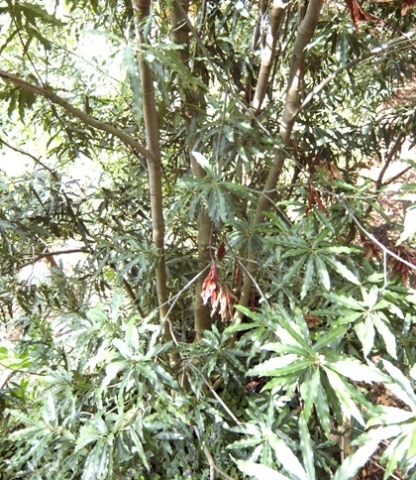 Faurea macnaughtonii, commonly known as the terblanz or terblanz beech, is a tall, evergreen tree with dense, rounded crown, growing from 8 m to 25 min height (SA Tree List No. 74). This is the tallest member of the Proteaceae family in South Africa.

Its bark is initially smooth and pale grey, becoming thick, dark grey and coarse from being furrowed longitudinally. Flowers, appearing in summer, grow in long (up to 16 cm), terminal spikes, white or pale pink in colour and sweetly scented. The fruit is a small nutlet covered in hairs and retaining the style at its tip. Nutlets may be found on the tree as late as early winter.

The species distribution from Knysna along the Eastern Cape and KwaZulu-Natal coastal regions, Swaziland and the Lowveld to Limpopo has curious discontinuities that probably developed later. Further north, the tree also occurs in Tanzania and on Madagascar.

The habitat is temperate and tropical forests and forest margins. It is common in the mistbelt of northern KwaZulu-Natal. The species is deemed rare, although its population in habitat is stable early in the twenty first century.

Macnaughton, for whom the tree was named, was a Knysna forest conservator around the end of the nineteenth century (Coates Palgrave, 2002; Schmidt, et al, 2002; Pooley, 1993; http://redlist.sanbi.org).