Home » TYPES » Trees » Philenoptera violacea
Back to Category Overview
Total images in all categories: 8,892
Total number of hits on all images: 3,866,725 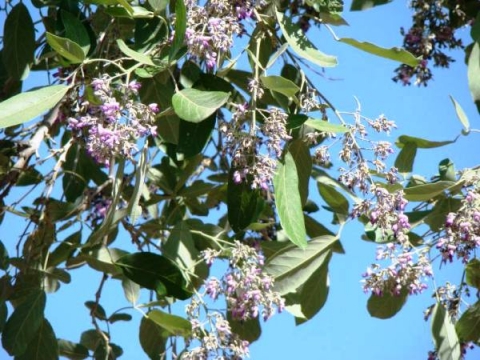 Philenoptera violacea, the apple-leaf tree, is a large, semi-deciduous tree that grows throughout the eastern regions of South Africa from Eastern Cape to Limpopo and in several of the neighbouring countries, up to the DRC (SA Tree List no. 238).

It was well-known as Lonchocarpus capassa, the appelblaar in Afrikaans. The tree belongs to a small genus with other African members. It is a protected tree in South Africa. The species is not considered to be threatened in its habitat early in the twenty first century.

The wood is used to make mortars for pounding grain, tool handles and ornaments. Infusions for treating various disorders, including gastro-intestinal conditions, have been made mainly from roots of this tree in African indigenous medicine (www.plantzafrica.com; http://redlist.sanbi.org).