Home » TYPES » Trees » Phoenix reclinata green fruit
Back to Category Overview
Total images in all categories: 8,883
Total number of hits on all images: 3,864,041 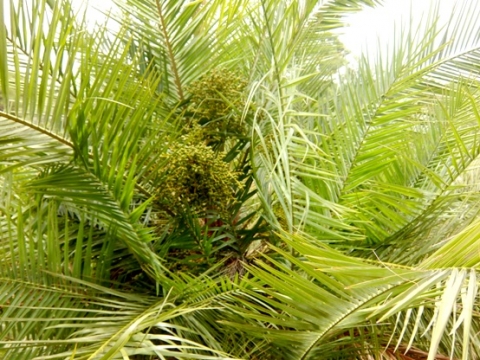 The male flowers of Phoenix reclinata, a dioecious palm tree, grow in large sprays that produce clouds of dust-like pollen in season, which is late winter to mid-spring. The calyx is cup-shaped and there are three petals. The six stamens are joined at the base.

The female flowers form short, branched heads among the leaf bases. The flower is globose and small, its calyx also cup-shaped, the petals also three. The ovaries found in the female flowers comprise three free carpels, while the six vestigial stamens are also visible.

The edible fruit of P. reclinata is an ovoid, bright orange drupe, resembling a small date with little flesh around its seed. The fruit is astringent when green, sweet once it is ripe. As it is smaller than those of the commercial date palm, P. dactylifera, it brings more work in picking enough for satisfying hunger (Coates Palgrave, 2002).