Home » GENERA T-Z » Tritoniopsis » Tritoniopsis antholyza
Back to Category Overview
Total images in all categories: 10,710
Total number of hits on all images: 5,375,852 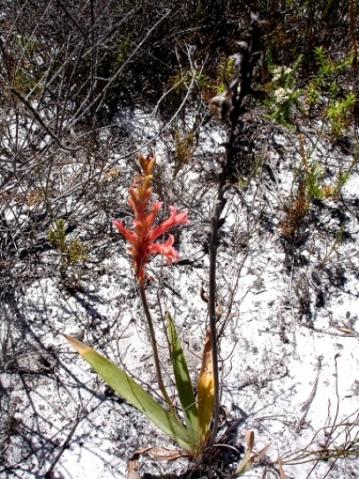 Tritoniopsis antholyza, the karkar reedpipe, is a robust, cormous perennial reaching heights around 90 cm. It grows three to six sword-shaped, leathery leaves and a flower stalk to 90 cm. The leaves have several conspicuous longitudinal veins.

The species distribution is in the Western, Eastern and Northern Cape, from the Gifberg to Port Elizabeth. The photo was taken in December near Fish Hoek. The habitat is rocky slopes. The species is not considered to be threatened in its habitat early in the twenty first century (Manning, 2009; Mustart, et al, 1997; http://redlist.sanbi.org).