Home » GENERA C » Crassula » Crassula plegmatoides
Back to Category Overview
Total images in all categories: 11,411
Total number of hits on all images: 6,186,566 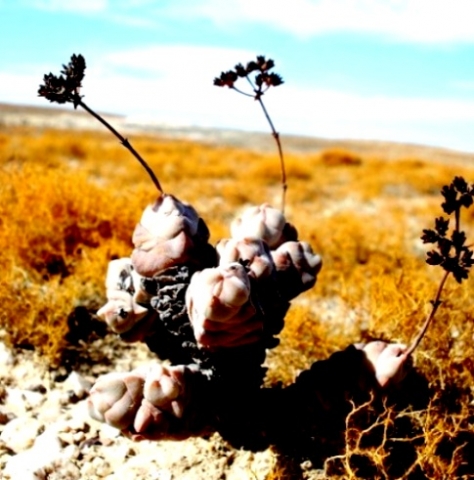 Crassula plegmatoides is a dwarf succulent that grows to 10 cm. Branching into a clump happens in time, as well as branching higher up. (Some sources say that the plant does not branch.) Taller stems may keel over and continue in a decumbent position.

The flowers of C. plegmatoides grow in a panicle on an erect stalk that emerges from the stem tip. They are small and cream, appearing in autumn. The brown, dried out inflorescence persists on the plants as can be seen here.

The distribution lies on the coastal plain in the west of Namaqualand from Kleinzee to southern Namibia. The habitat is exposed quartzite, sandy slopes among pebbles. There is low rainfall, but fog from the sea is common (Le Roux, et al, 2005; www.desert-tropicals.com).