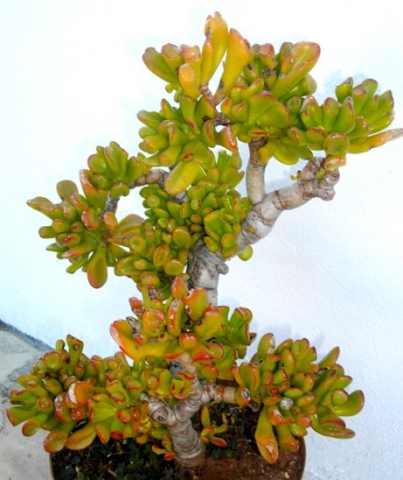 Crassula portulacea is not a natural South African Crassula species according to the species list of Smith, et al, (1997).

It is likely to be a cultivar, sometimes called Gollum, thought to have some vague resemblance to the Tolkien character. The flaring leaf tips have also assumed the common name of Shrek's ears after the film character.

If a cultivar, the constituting parent plant material may involve the South African species C. ovata, with which this plant is often associated. The tree-like growth form shown in the picture resembles that of C. ovata, as do the pale grey, branched and succulent stems. It is doubtful if this plant ever gets as big as C. ovata can.

C. portulacea var. cristata, as the plant is sometimes called, (as well as some variations on the theme), is fairly common in South African gardens, especially in containers (www.davesgarden.com; www.asknature.org).