Home » GENERA C » Crassula » Crassula rubricaulis
Back to Category Overview
Total images in all categories: 11,104
Total number of hits on all images: 5,773,108 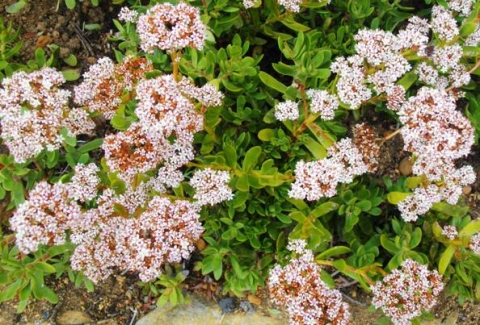 Crassula rubricaulis, the red-stem crassula or rooistingelplakkie in Afrikaans, bears large heads of small white flowers. The blooming season is summer and autumn according to www.plantzafrica.com and autumn to winter according to Vlok and Schutte-Vlok (2010).

Such differences are more likely for plants widely distributed, bringing about different growing conditions in parts of the region. This species ranges from Cape fynbos to more arid Little Karoo and Eastern Cape habitats. The western part of this plants natural distribution receives winter rain, the eastern part summer rain and in places much less of it.

It may well be that your garden specimen also displays different characteristics to those described in the available texts, due to e.g. the particular microclimate, soil, position and sourcing of your plant.