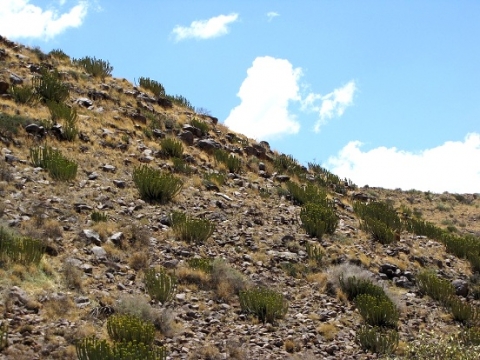 There are (or used to be) two recognised varieties of Euphorbia avasmontana on the List of Southern African Succulent Plants (Smith, et al, 1997), viz. var. avasmontana (the plant in picture) and var. sagittaria that also grows in the Northern Cape and Namibia. These plants were photographed in the Northern Cape during October, showing the typical habitat.

E. avasmontana is similar to E. virosa and some other large Euphorbia species of the region. Differences lie in the scars made by fallen cyathia, the shape of the capsule, the branching and the shape of the stems.

The habitat is exposed stony slopes in semi-desert land with low rainfall and extreme temperatures. The annual rainfall in this habitat varies between 150 mm and 300 mm per annum. This plant is often seen in the company of Aloidendron dichotomum. The species is not considered threatened in its habitat early in the twenty first century (Van Jaarsveld, et al, 2006; www.cactus-art.biz; www.redlist.sanbi.org).