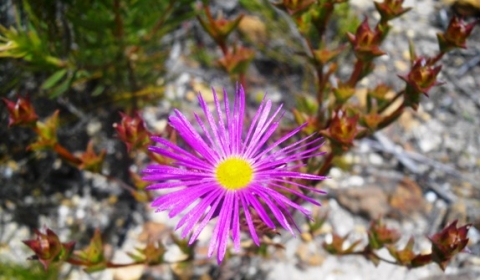 Previous
Image 1 of 16
Next

The Erepsia genus of Western and Eastern Cape mesembs or vygies (Afrikaans) are named for their hidden reproductive parts. The word origin of Erepsia is Greek, erepsis, meaning I hide myself. The vital parts of the flowers are hidden among a multitude of staminodes in the flower centres. Such modesty is not common in the flower world. Staminodes are sterile or abortive stamens, frequently (as in this case) resembling stamens without anthers. Sometimes, however, staminodes resemble petals, as in canna flowers.

Several of the Erepsia plants in the Western Cape, where many of them are endemic, are known as altydvygies (always mesembs), because the flowers remain open day and night (unlike many other mesemb species that close at sunset).

Erepsia flowers are thus pollinated either by day or night insects, the service arrangements varying from species to species. The leaves of erepsias are characteristically three-sided or triangular in cross-section, sharply angled at the margins and keel. This is similar to some other mesembs, such as some of the delospermas.

Erepsia leaves always have sharp, somewhat thorny tips. The leaf surfaces are smooth covered by a waxy layer. The stems are smooth. The staminodes consisting only of filaments, conceal the stamens partly or totally, depending on the species.

The ovary in the centre at the base of the flower is concave, i.e. hollow, causing the staminodes arranged around it to curve inwards and over it.  There are 27 species of Erepsia (Smith, et al, 1998).