Home » PARKS AND GARDENS » Karoo Desert NBG » Aptosimum procumbens
Back to Category Overview
Total images in all categories: 11,523
Total number of hits on all images: 6,601,825 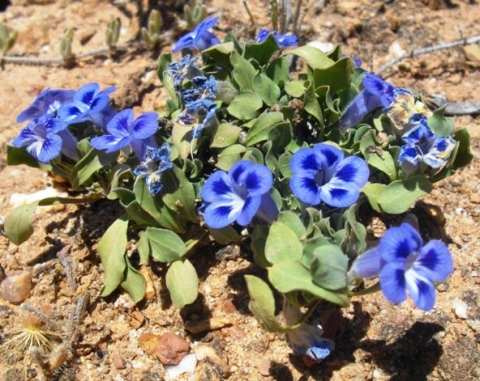 Previous
Image 3 of 16
Next

Aptosimum procumbens is one of the two Aptosimum species found in the Little Karoo. The genus comprises about 40 species, 20 of which in South Africa. There is a group of similar looking plants in the genus Peliostomum, but Aptosimum can be distinguished by the two underdeveloped or sterile anthers, hidden inside the flower tube.

Aptosimum leaves turn black in severe drought, causing the plant to appear dead. Rain revives it within a week or two. The leaves are spoon-shaped with short stalks. The flowers are pollinated by pollen-collecting wasps. The white throats and dark patches on the corolla add to the flower appearance. The photo was taken in the Karoo Desert National Botanical Garden.

It is possible that a colour variation of a more violet shade also exists from descriptions and photos, although all the plants observed in Worcester and Beaufort West were flowering bright blue (Vlok and Schutte-Vlok, 2010).