Home » PARKS AND GARDENS » Karoo Desert NBG » Schotia afra
Back to Category Overview
Total images in all categories: 11,523
Total number of hits on all images: 6,601,723 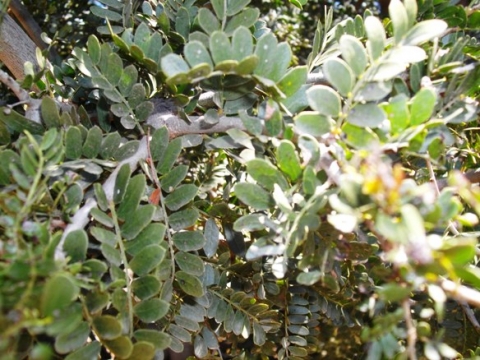 The higher the human population density becomes, the smaller the average garden will be.

Schotia afra (SA Tree List No. 201), the Karoo boer-bean, is one of those rewarding small, evergreen trees that gardeners can still consider: It has a benign root system that won't break walls and foundations easily. At mature size it is still suitable; heights of 5 m may be reached, but not often. The tree's attraction is convincing; the red flowers and foliage highly decorative. There will in season be birds and insects checking it for food. The tree does not mess much.

There are two variations of this tree: a larger leaf one in the southern and Eastern Cape (var. afra) and a small leaf one in Namaqualand and Namibia (var. angustifolia). The showy panicles of red flowers appear in spring, followed by woody pods containing the discoid seeds. Indigenous people used to eat the seeds as they are, or roasted and ground up.

This specimen growing in the Karoo Desert National Botanical Garden is var. afra, showing the pinnate leaves, but the flowers are gone as the photo was taken in January. After rain or with a little watering it would look greener (Coates Palgrave, 2002).