Home » TYPES » Mesembs » Braunsia vanrensburgii
Back to Category Overview
Total images in all categories: 11,662
Total number of hits on all images: 6,775,803 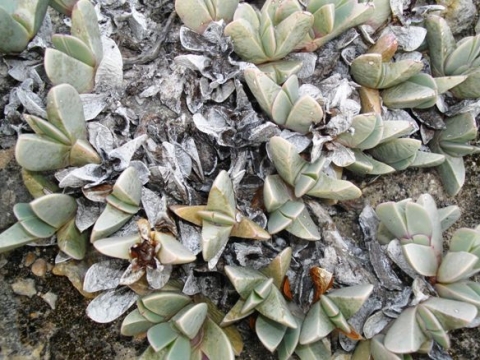 Braunsia vanrensburgii has single white flowers that appear in December to April. Some report creamy yellow flowers though. The flowers open towards noon and close before sunset. The fruit is woody, flat at the top and has five sections.

According to Wikipedia there are only nine species in the Braunsia genus, which belongs to the Aizoaceae family. Smith, et al, (1998) report only five species for the genus.

B. vanrensburgii does not at first glance appear to be very similar to the other members of its genus. It may just be that this could be another candidate in for a name change in the future! The Braunsia genus was previously called Echinus or hedgehog, due to the spiny, round seeds.