Home » TYPES » Parasites » Harveya huttonii flower
Back to Category Overview
Total images in all categories: 9,733
Total number of hits on all images: 4,367,519 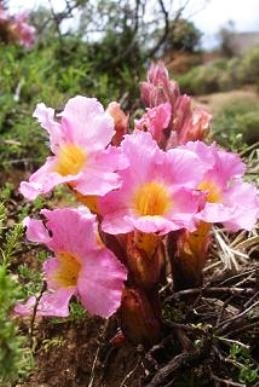 Harveya huttonii used to be called H. pulchra among other names. It is a fleshy parasitic herb that reaches heights around 50 cm.

Funnel-shaped pink or lilac flowers with white or pale-yellow throats appear in short, lax racemes from midsummer to early autumn.

The plant occurs in the Eastern Cape. The habitat is grassland and damp scrub at higher altitudes. The species is not considered to be threatened in its habitat early in the twenty first century.

The Harveya genus of parasitic plants that belong to the Orobanchaceae family includes several species with spectacular flowers (Manning, 2009; http://redlist.sanbi.org).