Home » GENERA P » Polygala » Polygala bracteolata
Back to Category Overview
Total images in all categories: 11,638
Total number of hits on all images: 6,757,010 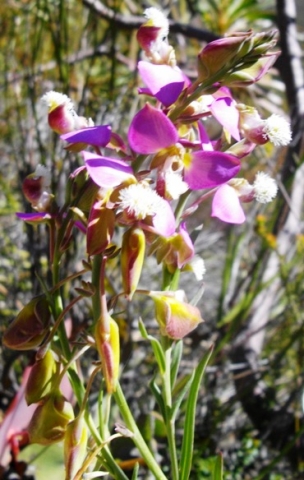 Polygala bracteolata is one of the about 600 species of this interesting genus. Polygala plants are dicotyledons, often referred to as milkworts or snakeroots. The genus comprises herbs and shrubs, as well as some small trees. Their flowers resemble those of Fabaceae plants, but are structurally quite different.

P. bracteolata has an erect growth form. It achieves heights above 1 m. Magenta flowers are borne from late winter through spring, although white ones do occur. The species distribution ranges from Vanrhynsdorp to Humansdorp and from the coast to elevations around 900 m.

The name spear-leaved milkwort for this species was recorded as long ago as 1796 in an edition of the Botanical Magazine (London).

Kubitzki (and others, 2004) report an instance in The Families and Genera of Vascular Plants that the period of seed dormancy for P. bracteolata is known on one occasion to have exceeded 42 years.

There is an orchid, Disperis capensis that resembles P. bracteolata to such an extent that the orchid is also pollinated by the Polygala pollinator! Plant law, unlike its human counterpart, is not compulsively litigious; plant competitiveness for resources and space is fierce, but without fights or grudges (Wikipedia; Bean and Johns, 2005; www.plantzafrica.com).