Home » GENERA D-F » Encephalartos » Encephalartos caffer leaves or fronds
Back to Category Overview
Total images in all categories: 10,710
Total number of hits on all images: 5,375,886 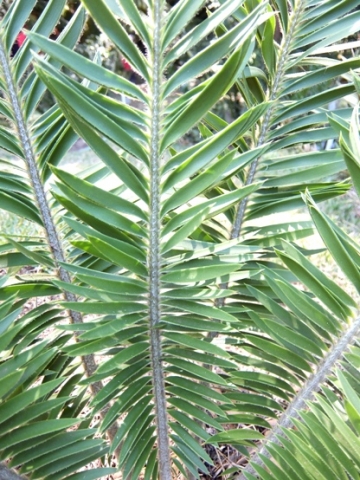 The bright to pale green leaves of Encephalartos caffer start off brown and densely woolly, becoming somewhat shiny as the leaflets lose hair, although never all of it. Leaves or fronds grow from 40 cm to 1 m long.

The leaflets are paler on their outer surfaces. Young leaflets, especially on seedlings, may have a few marginal teeth (near the stem tips) that disappear before they mature.

The median leaflets, those found in the middle section of the frond or leaf are the longest ones, becoming up to 10 cm long, 1 cm wide. The leaflets are narrow and lorate (strap-shaped) to narrowly elliptic, tapering to pointed, spinescent tips. The leaflet also tapers to its base where it has a very short petiole or none at all. Only the median leaflets point outwards, the upper ones ascend from the hairy rachis, while the lower ones sag and decrease in size to the bare petiole at the base.

Leaflets curve and twist variously in an untidy appearance, a notable feature in species identification.

Together with E. longifolius this plant was the first to be described botanically after its discovery in the 1770's by Carl Thunberg, famous student of Linnaeus (Hugo, 2014; www.cycad.org; www.plantzafrica.com).