Home » GENERA P » Protea » Protea dracomontana
Back to Category Overview
Total images in all categories: 9,140
Total number of hits on all images: 4,084,156 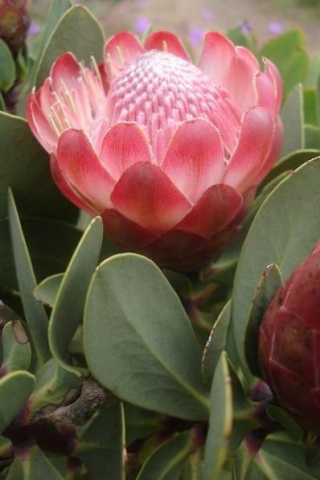 Protea dracomontana is a dwarf plant compared to many other well-known members of the genus. Several stems grow from the large, persistent, underground rootstock. The plant was only recognised as a distinct species during the 1960s.

This summer rainfall Protea is restricted to high elevations along the eastern escarpment. The habitat is sub-alpine Themeda or rooigras grassland, between altitudes of 1600 m and 2200 m, mostly in basalt. The plant may produce dense stands on its home ground.

This is a plant that is dependent upon sporadic veld fires for its well-being.  Should no burning occur for too long, flowering diminishes or stops, the plants become static, lose leaves and assume "a moribund appearance".

P. caffra a widespread species that also grows in the lower Drakensberg regions on sandstone, is said to sometimes hybridise with this one (Rourke, 1980).