Home » GENERA E-F » Euryops » Euryops othonnoides
Back to Category Overview
Total images in all categories: 12,072
Total number of hits on all images: 7,366,219 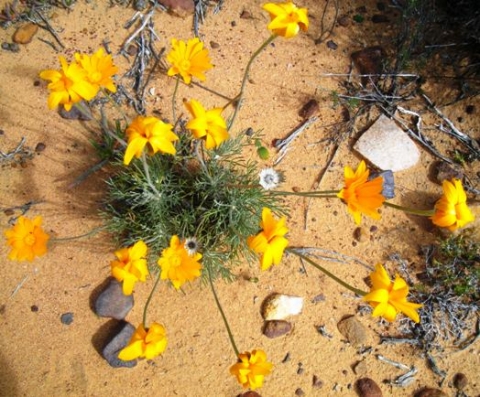 Euryops othonnoides, in Afrikaans known as klipharpuis (stone resin), is a low-growing shrublet from 20 cm to 50 cm in height. Growing from a single stem, the plant does not resprout after fire.

The species distribution is fairly widespread inland in the west of the Western Cape, mainly between the Anysberg, the Hex River Mountains and the Cederberg, extending slightly northwards into the Northern Cape.

The habitat is rocky outcrops, cliffs and crevices at higher elevations in arid fynbos. The species is not considered to be threatened in its habitat early in the twenty first century (Vlok and Schutte-Vlok, 2010; Bond and Goldblatt, 1984; iSpot; www.redlist.sanbi.org).