Home » TYPES » Herbs » Tricliceras laceratum
Back to Category Overview
Total images in all categories: 12,072
Total number of hits on all images: 7,366,268 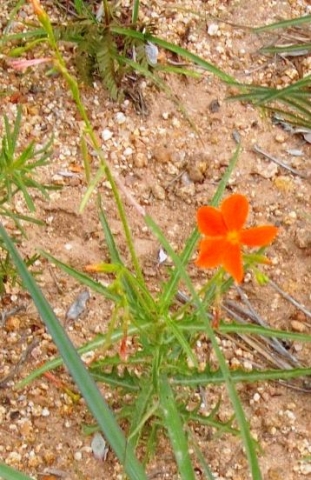 Tricliceras laceratum, commonly lion’s eyes, is a slender perennial herb growing to 30 cm in height. It belongs in the Turneraceae family that mainly occurs in tropical America, although Africa has some genera and species. Some place this genus in Passifloraceae; it did form part of Wormskioldia in the past.

T. laceratum grows along the coast of northern KwaZulu-Natal and in the Mpumalanga and Limpopo Lowveld. It is also found in Swaziland and probably in the far south of Mozambique. This plant was seen in the central region of the Kruger National Park.

The habitat of the species is open grassland and subtropical woodland in hot, high rainfall areas. The species is not considered to be threatened in its habitat early in the twenty first century.

There is a yellow flowering species, T. glanduliferum in Limpopo and Mpumalanga, as well as several others with orange flowers, such as T. longepedunculatum with scattered purple hairs on stems and leaves, a plant that is sometimes eaten as a vegetable, T. schinzii that grows in Zimbabwe and T. mossambicense with smooth, entire leaf margins.

In all there are about eleven Tricliceras species (all in Africa), seven of which occur in South Africa (Manning, 2009; Leistner, (Ed.), 2000; iNaturalist; iSpot; http://redlist.sanbi.org).