Home » TYPES » Herbs » Valeriana capensis var. nana
Back to Category Overview
Total images in all categories: 11,019
Total number of hits on all images: 5,657,494 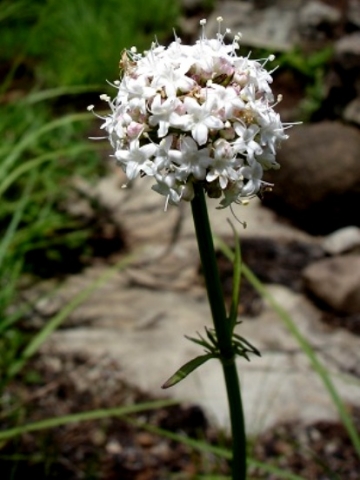 Valeriana capensis var. nana , one of three varieties of the species called Cape valerian and in Afrikaans wildebalderjan (some boisterous character called Jan), is a robust perennial growing from thin rhizomes to heights around 1,2 m.

It produces mostly basal, branched rosettes of usually compound, hairy leaves comprising ovate leaflets near the ground. The terminal leaflet is larger. A node with variable, narrow, composite leaves can be seen below the inflorescence. The flower stems are long and erect.

This variety is found in montane grassland of the north-east of the Eastern Cape and the west of KwaZulu-Natal, as well as in Lesotho. It is not considered to be threatened early in the twenty first century.

V. capensis, in the guise of different varieties, is thought to be the only species of this genus found naturally in southern Africa, growing across a wide distribution.

There are about 500 species of Valeriana worldwide, mainly distributed in the northern hemisphere, but also in Brazil. V. officinalis, a European plant that is known as a source of heart medicine, resembles this plant, apart from its small terminal leaflets. The roots of V. capensis have been used widely in in traditional medicine in South Africa (Van Wyk and Gericke, 2000; iSpot; JSTOR; www.redlist.sanbi.org).